I had some requests for a link to the "Naughty Little Mermaid" video. Well, there you go.

Call me a nerd, but I like Leonard Nimoy and Bill Shatner better.

Also, the latest from Andy Samberg and the crew at SNL.
Posted by MosBen at 11:12 PM 2 comments:

I've been sitting on this link for a while now, thanks to Mr. Brottman for that, without blogging it. I think it's fair to say I'll see this movie.
Posted by MosBen at 12:41 PM 2 comments:

I haven't mentioned Child's Play yet this year, so it's damn time I do. Now in its fourth year, Child's Play is the brainchild of the Penny Arcade boys. It occurred to them in 2003 that with all the bad press games and gamers get, it'd be nice to point to to say, "See, we're decent sorts of folks too. Games didn't make us killers." This isn't to say this is a purely mercenary affair; doing good deeds to be lauded. The targets of the yearly fundraiser are Children's Hospitals. In the first year they ran the charity out of their garage and supported one hospital in Seattle. Now they run everything online and have the gifts and money sent directly to the hospitals, which increasingly are spread over the globe. Donations of video games, money, and miscellaneous toys have increased every year since its inception and they're currently shooting for $800,000 raised this year and over $2 million since the first year. Another neat facet of the charity is that they take absolutely no administrative fees or charges from the donations; every dollar goes to the hospitals. If you're thinking of making a donation this year, there are worse places to send your money to.

Incidentally, they just had a dinner/auction and there are pictures up.
Posted by MosBen at 7:02 PM No comments:

Before I take off for my desperately needed month-long break (during which time I will write a paper on infinitesimals, because that's just how much fun my life is), I thought I'd clear out my rather large `To blog' folder. Evidently it's been a couple of months since I've done this, because the first post is dated September 20.

Sony just can't get a leg up. The PS3 is having supply problems on top of not having a great launch lineup and being mega expensive. The PSP is getting trounced by the Nintendo DS. A year ago they tried to drum up support for the PSP by hiring graffiti artists to do tags supporting the machine. Now they've hired a company to make, among other things, fake You Tube videos from "fans" pledging their love of it.
Posted by MosBen at 9:47 AM No comments: 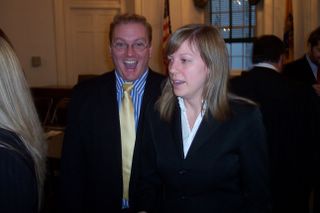 This past Monday was the swearing in ceremony for the New Jersey Bar. I'm a real lawyer now! Hire me!

I'm not sure if you all know about Jonathan Coulton, but if you don't, check out Code Monkey and the video for Flicker. He's got lots of free songs to download, but I'm honestly considering buying some stuff from him just to throw some support his way. Here's his main page.

Yeah, I'm pretty much posting this so I can find it at some later date, but you really all should check his stuff out.

Edit: Some lyrics for the holidays:

There have been scattered reports of faulty straps on the Wiimote since its release. Evidently these strap failures have been responsible for more than a few broken TVs as the Wiimote flies from the sweaty hand of a gamer not used to moving quite so much. Seriously, people have accidentally broken their expensive HDTVs by essentially throwing the Wiimote at the screen.

Anyhow, whethere there's a design flaw or not, here are some more things to avoid when using your fancy new Wii.
Posted by MosBen at 11:19 AM No comments:

Here's a new Halo 3 trailer. Not a ton of gameplay, but it's enough to get me excited.

Also, NextGen Wars is finally a useful site to watch the battle for console supremacy develope.
Posted by MosBen at 7:46 AM No comments:

End of the semester hell

is, well, hell. I should've made this official weeks ago, but my blogging will be on hiatus until I get back from California mid-January. Unless I give you a blog dump sometime in the next few days, which is quite likely.

Happy holidays, everyone!
Posted by Noumena at 10:31 PM No comments:

Shorter NYT: We love us some gender essentialism!

A fascinating article this morning in the NYT on positive changes in the attitudes of parents, educators, and child psychologists towards very young transgender kids. Unfortunately, the writer seems completely ignorant of the issues surrounding transgender, and spend the first third of the piece forcing the entire issue into a cisnormative framework. Here are some highlights:

`Children as young as 5 who display predispositions to dress like the opposite sex are being supported by a growing number of young parents, educators and mental health professionals.'

`The prospect of cross-dressing kindergartners has sparked a deep philosophical divide among professionals over how best to counsel families.'

Transgender people are not cross-dressers. The whole point is that they aren't easily classified as either gender. The first part of this sentence is as fundamentally mistaken as saying intersex people have the wrong genitals.

`Is it healthier for families to follow the child’s lead, or to spare children potential humiliation and isolation by steering them toward accepting their biological gender until they are older?'

That is, is it better to enforce strict dichotomies of sex and gender just so we don't have to challenge them?

The latter two thirds is much better. It's probably no coincidence that this part is almost entirely composed of quotations from parents and progressive educators and the like.
Posted by Noumena at 9:34 AM No comments:
Newer Posts Older Posts Home
Subscribe to: Posts (Atom)