Rob Liefeld is to comic art as Chris Claremont is to comic writing. If you're looking for the connection, it's that they're both among the most over hyped A-list artists in their field. They both got incredibly popular on a couple skills that helped them sell books like gangbusters. They both totally suck. Here's a list of Rob Liefeld's crap. I have to say that I haven't had a good laugh like that at the internet in a long while. Link.
Posted by MosBen at 7:50 PM 2 comments:

Every time I go to write a post, it's either (a) a completely inadequate response to the immolation of the feminist blogosphere, or (b) utterly trivial. I'm going to take this as a sign that it's time for a blog vacation. I'll be back sometime in May.
Posted by Noumena at 9:15 PM No comments:

They just mentioned "The Uncanny Valley." Rad.
Posted by MosBen at 9:53 PM No comments: 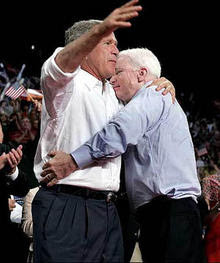 I love bad photos of John McCain. Let's put some good captions in the comments!

Example: I found this rather bizarre claim on a YouTube video arguing that, first, the rape rate had fallen, and second, this was because of the increased availability of pornography. Hence, third, YouTube should allow pornography. Not only is this a post hoc ergo propter hoc fallacy, but it didn't even sound true.

Now, in about 1992, the rape rate peaked somewhere around 42 or 43. This makes for a 25% reduction. But focussing on this period of time is completely disingenuous. In the early 1960s, before the lifting of indecency laws allowed the pornography industry to flourish, the rape rate was less than 10 per 100,000. So, since pornography became easily available, the rape rate has seen a net increase of 200%.

This is evidence supporting the claim that pornography encourages, rather than discourages, rape. But it's far from conclusive. There are simply too many other factors that aren't being taken into account to draw that conclusion.
Posted by Noumena at 10:47 PM 2 comments:

How is this woman so prolific? Does she just not sleep?
Posted by Noumena at 8:28 PM No comments:

Anti-intellectual and the classism of American education

The result of all this [the class divisions in the American education system], according to Bageant? People from rural, poor communities have been virtually programmed for generations to listen not to their own reasoning, but to whoever speaks loudest and most authoritatively on any subject. They respond to simple, emotionally charged messages — even when the the issues that the messages involve are complex and nuanced. They resent, and therefore distrust, those Americans who had greater access to education, or who were taught to question as they were not; Bageant believes this is less about anti-intellectualism/anti-elitism than it is simple schadenfreude [sic; I think the blogger means `resentment'] towards the more fortunate. And they’ve developed the perfectly reasonable survival mechanism of listening to whoever seems willing to help them, regardless of whether those people actually are helpful. Bageant notes cases of conservative politicians who visited rural areas and shared a beer with poor constituents — then turned right around and instituted policies that made health care, housing, food, and education unaffordable for those same people. Frequently these politicians got elected multiple times in spite of this. Loyalty, after all, is one of the values their constitutents were taught in school.

Every time I hear someone argue why Superman sucks, I suspect they haven't read many Superman stories, have a lack of imagination, or both. Link.
Posted by MosBen at 9:16 PM 5 comments:

Gamers Dissapoint Me Once Again

I know, it's the internet, and I really should have expectations in the basement as far as good debate goes. Still, the reactions to this interview with N'Gai Croal about the controversial Resident Evil 5 trailer are pretty abysmal. It's not that most gamers seem to disagree with Croal that bothers me, it's that they seem completely incapable of engaging his points directly. The number of people that respond with "it's just a game" when he explains in the interview itself why that's not a sufficient answer it just disheartening.
Posted by MosBen at 1:12 PM 2 comments:

A weird argument from Clinton supporters

I've seen this line from Clinton supporters before, and it was just as bizarre:

Obama's advantage hinges on a system that, whatever the actual intentions behind it, seems custom-made to hobble Democratic chances in the fall. It depends on ignoring one of the central principles of American electoral politics, one that will be operative on a state-by-state basis this November, which is that the winner takes all. If the Democrats ran their nominating process the way we run our general elections, Sen. Hillary Clinton would have a commanding lead in the delegate count, one that will only grow more commanding after the next round of primaries, and all questions about which of the two Democratic contenders is more electable would be moot.

Ok, I was not an early Obama supporter. I was an Edwards guy first and was concerned that Obama was a really good speaker with not a lot of substantial policies backing up the oratory. This was, of course, a year ago. Then the primaries began and bit by bit, whether through the necessity of having to answer a grilling by the press or just because he was releasing plans as they came together in his policy shop, Obama filled out his policy initiatives. After Edwards' ship sank I spent a while not supporting either Obama or Clinton because I believed, and still believe, that they're both similarly liberal and would both make fine executives. Then I got moved by a couple Obama speeches and Clinton's campaign started doing some really indefensible things, like advocating that she get delegates from Michigan where Obama wasn't even on the ballot and continuing to employ the odious Mark Penn, and I became an Obama supporter. I still think Clinton herself would be a fine executive, but I won't support the campaign that she's running. Anyway, it was endlessly annoying to me to hear a Clinton supporter at dinner last night use the old "Obama is all rhetoric" meme. Sadly, this is also something I hear other supporters online and even the Clinton campaign itself argue sometimes. Look, he was a relatively new politician at the start of this process and his policies were admittedly thin, that that's simply no longer true. I think there's plenty of room to disagree with Obama's specific policies, and indeed on some I do, and it's completely legitimate to argue that he won't be able to pass some of his initiatives, but let's have that debate rather than recycling arguments from 2007 which aren't relevant anymore.
Posted by MosBen at 8:33 AM 5 comments:

I love Martin Luther King. First, he is without a doubt in my mind the most brilliant American orator of the twentieth century, and quite possibly the greatest since Abraham Lincoln. Second, he words are not just moving; they are deep and insightful. `Letter from Birmingham city jail' is one of the great philosophical treatises on civil disobedience.

And third, King was truly radical in his opposition to racism, poverty, and war.

That last sentence might be kind of surprising. In the narrative I got in high school American history, King was the moderate, keeping the civil rights movement from spiraling off into the violence and destruction of Malcolm X and, later, The Black Panthers. King was the safe alternative, who wanted us all to get along. He wasn't going to shoot at you, or burn your house down, or make a pass at your wife. He was the Nice Black Man who, after centuries of being stomped on, was politely asking for those evil racists to please take their boot off his face.

This narrative is almost 100% bullshit. It's true that King and X disagreed deeply over the use of violence. But King didn't speak with a voice of submissive pleading. He didn't ask for improvement. He demanded justice, at whatever costs necessary. Jim Crow was his most famous enemy, but it was far from the only one. King fought the de facto apartheid of the Northern cities, the invasion of Viet Nam, and the way capitalism ground down communities into a fine, atomic powder of poverty. (Obviously, I'm not as good with the metaphors as he was.) King was systematically and radically opposed to virtually every aspect of the American and international power structure. And on the fortieth anniversary of his death (which was yesterday, but I was busy and the past two weeks have been exhausting -- sorry Dr. King) it's vital that we respect the radicality of his vision.

His 'Letter from a Birmingham Jail' is in fact a blunt rejection of letting the establishment set the terms of social change. 'The purpose of our direct-action program is to create a situation so crisis-packed that it will inevitably open the door to negotiation,' he wrote, later adding, 'We know through painful experience that freedom is never voluntarily given by the oppressor; it must be demanded by the oppressed.'

Posted by Noumena at 9:57 AM No comments:
Newer Posts Older Posts Home
Subscribe to: Posts (Atom)