Does the welfare state hurt us all?

Free marketers like to tell a story that is prima facie plausible, and suggests that life under a system of the redistribution of wealth is worse for everyone, even the poor, than life under a free-market system. The story goes something like this: The high tax rate needed to appropriate wealth from the people who produce it takes away the incentive to produce more wealth. So, under a distributive system, less wealth is produced overall, and since there's less to go around, the people who would have benefited from the redistributive system are actually worse off.

There are obviously some huge gaps in the reasoning there, and I've some suppressed some very, very important ceteris paribus (`all other things being equal') clauses. Ignore those for the moment. The story revolves around the claim that, under a distributive system, less wealth is produced overall. This is an empirical claim. Is it true? Here are two graphs from the US Department of Commerce that suggest not.

These graphs show the percentage change in the US GDP over the past several decades, including during the rise and fall of the Roosevelt-Johnson redistribution system. GDP is a measure of the size of the economy, and is one rough way of measuring how much wealth the country has. The percentage change in GDP over a given period of time shows how much the economy grew -- how much total wealth increased -- over that period of time. If the free marketer's claim is right, then ceteris paribus, percentage change in GDP should be less under a more radical restributive system (with more regulation, higher marginal tax rates, etc.) and greater under a system closer to the free market ideal. 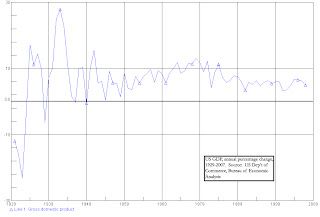 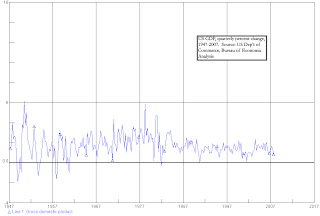 And the exact opposite is the case. During the height of the Roosevelt-Johnson system, the US economy actually grew a little bit faster than after Reagan started to dismantle it. The '70s, with the highest marginal tax rates the strictest regulation, actually saw the highest economic growth rates of the past half-century. Since Reagan started lowering tax rates and removing regulation, the economy has seen relatively mild growth.

This isn't a Quick Refutation, since I haven't shown that the crucial ceteris paribus clause is satisfied. And it seems quite likely that it's not -- there have been wars and changes in energy costs and all sorts of things that can make a difference. But this does place a burden on free marketers: if regulation and taxation are supposed to be bad for the economy as a whole, then why did our economy do better when it was more highly regulated and highly taxed?

Posted by Noumena at 10:28 AM
Labels: Economics