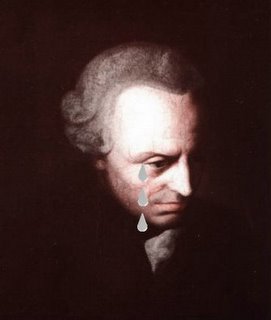 Awww, look at how sad Kant is! Want to know why? Check below the fold.


Remember, Kant is all about autonomy. The fundamental moral criterion is whether or not your actions respect others as autonomous beings. It's true that, being a man of his time, he says some chauvinistic things about women being inferior to men, but hopefully in the two hundred years he's had to keep an eye on us FROM BEYOND THE GRAVE he's learned a bit about just how capable women really are. So, as I've argued elsewhere, the right to choose to abort a pregnancy is defensible on straightfrowardly Kantian grounds: you can't deny a woman the right to choose to abort a pregnancy without presupposing that she's incapable of acting as a rational, autonomous being at all.

And Sam Alito did this explicitly in his dissent in Casey, in regards to a spousal notification condition. I'll let William Saletan explain:

Now, in your opinion in Casey, right after that quote from Justice Marshall, you write this: "These harms are almost identical to those that the majority in this case attributes to Section 3209." Section 3209 is Pennsylvania's spousal-notice provision. Then you conclude, "Justice O'Connor's opinions disclose that the practical effect of a law will not amount to an undue burden unless the effect is greater than the burden imposed on minors seeking abortions in Hodgson or Matheson." And you uphold the spousal notice law because its burden doesn't exceed the burdens in those other cases.

And from the Supreme Court's controlling opinion on Casey, written in part by the justice Alito has been tapped to replace:

The husband's interest in the life of the child his wife is carrying does not permit the State to empower him with this troubling degree of authority over his wife. … A husband has no enforceable right to require a wife to advise him before she exercises her personal choices. … A State may not give to a man the kind of dominion over his wife that parents exercise over their children.

Kant is very, very explicit when he explains why children are not given the rights and freedoms of adults: their capacity for rational agency is not yet fully developed. They need to be educated, taught both theoretical and practical knowledge, before they can be considered autonomous individuals.

Don't make Kant cry. Call your Senator and tell them that Kant wouldn't support anyone who supports Alito, and neither will you.