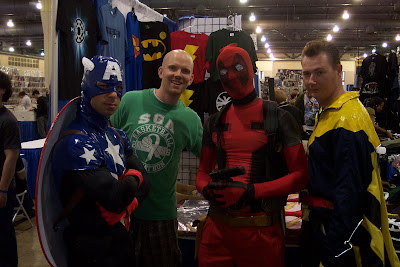 Friend 1: "Man, I'm going to be the new Bucky Captain America! It's going to be awesome!"

Friend 2: "Oh yeah? I'm going to be Deadpool, and it's going to be totally awesome despite X-Men Origins: Wolverine!"

I have to say though, while the Cap and 'Pool costumes are totally awesome (somehow I think that's what 'Pool would actually look like in real life), I've always had a soft spot for Banshee. I have a soft spot for lots of characters that never get any respect. Like Cyclops. He's the X-Men's leader! That's cool!
Posted by MosBen at 9:26 PM

He lost the leadership of the X-men to Storm when she didn't even have any powers. Enough said.