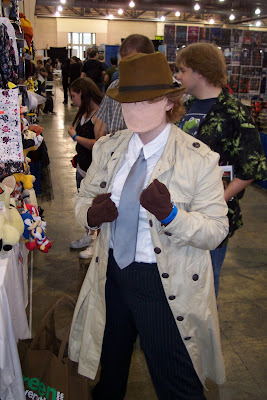 The Question. He, like several other Charlton Comics characters, was the basis for a character in Alan Moore's Watchmen; in this case Rorschach.

Actually, the Vic Sage Question recently died in the comics (cancer) and was replaced by a female version (Renee Montoya, who was created for the Batman Animated series from the 90s). I'm pretty sure this was a lady in the costume, so maybe she was going for that.
Posted by MosBen at 10:31 PM