Portrait of the web of belief 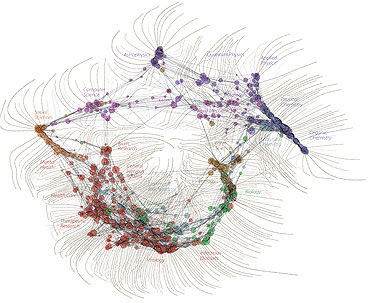 Like many philosophers of science, I'm a holist. Very loosely, this means that I don't think individual statements or propositions as such are ever shown to be true or false or have a determinate meaning. They get their meaning -- and their truth or falsehood -- from being part (or not) of what Quine called `the web of belief' or `our best theory of the world'. Astrophysics, for example, doesn't stand on its own; it depends on our mathematical theories of abstract geometry and topology (which is not so surprising), but it is also connected with our chemical theories and even biology and sociology (which should be quite surprising).

This image maps these relations between different `paradigms' (a more accurate term would probably be `microdisciplines') within contemporary science. (For a legible or printed version, follow the links here.) Astrophysics is that cluster up at the top; pure mathematics is the cluster below it, with chemistry over on the left, social science on the right, and the biological sciences sweeping out the long C across the bottom. But, as the map makes clear, these disciplines are not sharply defined, and draw on and support each other. It would be impossible to remove and replace one `paradigm' without changes rippling through the entire web.

Something is missing from this picture, however, and that lack is saddening and frustrating. The vast empty space in the middle of this image should house robust and active research programmes in logic, ethics, and philosophy of science. The function of philosophy is to be the theory describing the structure and management of our aggregate best theory of the world. Philosophy is not prior to the web, or above it (there is no prima philosophia); instead, it forms the web into a coherent whole, drawing support from and supporting the other theories just the same way they draw support from and support each other. The absence of philosophy from this map reflects the sad fact that much of contemporary philosophy is irrelevant to, and indifferent towards, contemporary science. Often the best philosophers of science manage to do is squabble over rarefied and ludicrously abstract models; other microdisciplines within philosophy don't even usually get that close.

How to Make Your Hair Grow Faster said...

i don't understand a thing about philosophy.. just be real in this world. only reality matter .

Find info on How To Make Your Hair Grow Faster Tips from my blog !!