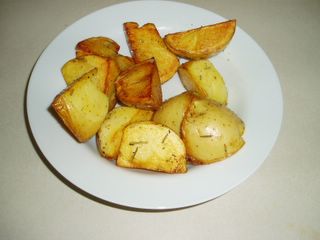 I love potatoes. Steamed, baked, mashed, au gratin, whatever, they're filling and make a fantastic foundation for complex flavours (I put all kinds of stuff into my mashed potatoes). Today we're frying them in a little oil, and just using a few seasonings; 'roasting' can mean either 'cooking with dry heat' or 'browning', and since we're using oil, this would be the second definition. I had them by themselves for lunch, but obviously they'd work nicely as a side dish.

This recipe comes from Cook's Illustrated, which is probably the best cooking magazine around. Sadly, it only comes out bimonthly. The potatoes take less than half an hour, are ridiculously simple, and the portions below are enough for a side dish for 3 or 4 or a main dish for 2.


Slice the potatoes into pieces fairly close in size. For small potatoes, slice in half; for medium (lemon-sized) potatoes, quarter so you have two cut sides and a third rounded side. Heat the oil in the skillet over medium heat until shimmering (makes a ripple effect when you tilt the pan). Add the potatoes in a single layer with one of the cut sides down and cook without stirring until GBD (golden brown and delicious) on that side, about 5 minutes. Just let them sit there. Oil will sizzle and probably jump a bit, but not smoke.

Use tongs to turn potatoes onto the other cut side (medium potatoes) or skin side (small potatoes). Be careful to avoid hot oil splashes. Cook another 5 minutes until the second side is GBD.

Turn the heat down to medium-low. Sprinkle seasonings onto potatoes and stir to coat -- in place of the garlic and rosemary, CI also recommends lemon and chives, and chili powder, paprika, and cumin. (If using fresh herbs, wait to add them after the potatoes are done cooking.) Cover and let cook another 6 to 9 minutes until the potatoes are tender and a paring knife slides in easily -- it's okay if the potatoes absorb all the oil in this process, so long as they don't get burnt to the skillet. Serve immediately; starchy foods get very soggy and mushy if they cool down after being fried.
Posted by Noumena at 3:28 PM

How to Make Your Hair Grow Faster said...

for me, any potato made foods such as cracker Jack, is my favorite :-)

Find info on How To Make Your Hair Grow Faster Tips from my blog !!