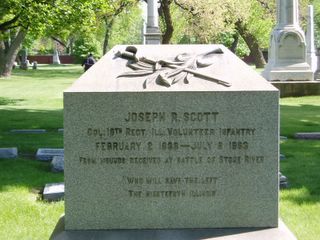 Most everyone I've shown this to hasn't been able to read it, so I'll copy it out:

"Who will save the left"

This man was just a few months past 25 when he died, my age. This marker is in Graceland Cemetery, a few blocks from my apartment.

I think our generation often thinks of veterans as veterans of Viet Nam, Korea, and World War II: old men in nursing homes or middle-age men begging for change on the sidewalk. But veterans are veterans because of who they were as young women and men, people our age who went through hell for their country, their people, and their values. The twenty-year-old just coming back from a tour of duty in Iraq, this day is for her, too, along with those old men and the young men they once were.