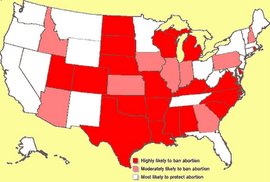 Your name is Emily and it is June, 2009. You've just finished your sophomore year of high school, one of the smartest kids in your class, and your voice teacher says you're one of the most talented young women she's worked with in her thirty years. You're looking forward to double-majoring in engineering and voice at a highly regarded university in the nearest major city in a couple years.

Except that school is Tulane, the nearest major city is New Orleans, you live in Louisiana 15 months after Alito cast the tie-breaking vote in the Supreme Court, overturning Roe, and you're three weeks late.

Your adventures continue below the fold.

A month ago your boyfriend (he's such a sweetheart, you <3 him 4evR!) took you to his junior prom, then to a hotel room for the night afterwards. Things happened, as such things will, things you were ready for and thoroughly enjoyed, except that your abstinence-only sex ed meant you'd never so much as seen a condom. He took himself out before he finished, because he didn't want either of you to get 'into trouble' (like I said, he's a decent guy in this loserville), but something seems to have gone wrong. The EPT he buys for you two towns away (that's almost an hour, each away) confirms it: you're pregnant.

You can't tell your parents. Neither of them have so much as acknowledged your older brother's existence in the three years since he was caught making out with his boyfriend in one of the bad practice rooms before school, though they did at least pay to have the broken arm your daddy inflicted on him fixed.

You can't have an abortion. Even if you could afford it, the nearest clinic that performs them is in Nashville, a twelve-hour drive away; your boyfriend would be happy to drive you there and back, but that would mean getting away from two sets of parents, secretly, for at least three days, plus the extra costs of gas, food, and a motel room.

You can keep the pregnancy, of course. But then your parents will still find out, meaning you'll neither need to give the baby up for adoption or find a way to make a living. The first option's a crap shoot, of course: who knows what kind of parents it will get, if it doesn't just spend 18 years churned through the bureaucratic grinder before being declared an 'adult' and legally emancipated from the state.

Raising the child yourself is probably the only decent option left to you. Which means dropping out of high school, 'moving' out on your own, and taking a job at either a fast food joint or Wal-Mart (there being no other jobs in your post-NAFTA small town economy), hopefully scraping enough together each month to afford all three of food, rent, and utilities. You'll get by, and you'll certainly love your child. But, every once in a while, you'll sit at the rickety card table in your kitchen after the dishes are done, sipping a cup of coffee, and wondering where you'd be if you'd gotten to go to college.

But such are the wages of sin, or so the preacher at the megachurch your parents go to every Sunday would say: what else do young women deserve for fifteen minutes of making love with their sweethearts but having their fondest dreams and desires dashed?