For one thing, it let me spend a week here: 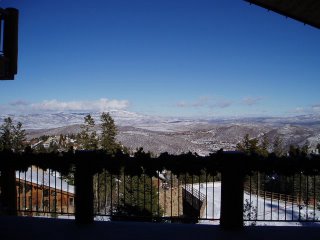 Why? One of my dad's new brothers-in-law is rather wealthy. Venture capitalist wealthy. Venture capitalist who gave ebay a healthy chunk of its startup money wealthy. Among many houses and vehicles, they have a 7,000 square foot 'cabin' on the ski slope (you can see one of the runs in the lower right there) in Park City, Utah (near where several Olympic events were held, and, in Summers, the home of the Sundance Film Festival) and a private jet.

Made even more surreal by spending 13 hours taking Southwest and a bus back to my 850 square foot ugly-ass yellow plastic siding house in South Bend, IN.

The other thing is that I bought a replacement display for my laptop for $225 including tax and shipping. Dell wanted twice that -- before tax and shipping -- for a used part that they may or may not have somewhere in their warehouse. Because the hinges broke and the warranty expired six months ago. So, saving money is good.

Because I read left to right, that emoticon will never make me think of a heart.