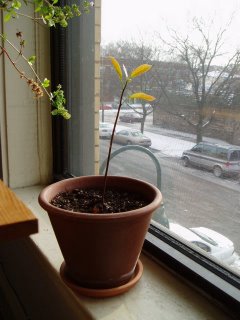 My avocado tree, newly sprouted, in the window of my apartment two years ago. The tree's now around 2 1/2 feet tall, and nowhere near as cute. But hardy! I don't know how it's put up with all the abuse and neglect I've showered on it since then -- being moved to a new place at least once a year, long stretches without being watered, northern Great Plains winters it was definitely not adapted for, even bug attacks.

I miss this apartment. Roomy and cheap, right across the street from the El, a short bike ride from Northwestern and Whole Foods, and just a few blocks from the lake. The neighborhood itself was about as exciting as the SB, but more popular areas of town were less than fifteen minutes away by El.