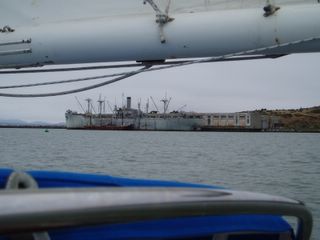 The Red Oak Victory, just outside Richmond Harbor, July 2004. Victory ships transported ammunition during WWII; this entire thing would be packed full of explosives and set off across the ocean, prime targets for the Japanese and German navy. Today it's a museum. More positively, these were the ships that 'Rosie the Riveter' built; apparently, there's a statue to her in front of the factory in Richmond Harbor proper.