And It Gets Better 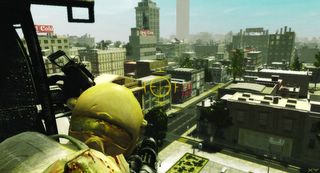 This is a screenshot of Ghost Recon, a launch title for the Xbox 360. This and more pics can be found here, but you'll definitely want to go here and wade through the crazy jibertalk language to find the video of this game in action because it will blow your mind. Seriously, this is amazing stuff.

Also, the official Xbox 360 site has a new montage video of various games being developed for the console. You've got to let the site load, then click on the football player's face a couple times to get the video to load.

And just because it's a cool video, go here and watch the cool video about trusted computing.

"Rest assured you'll get your money's worth. The greatest show in Heaven, Hell, or Earth."